MIT is a Confederacy of Dunces 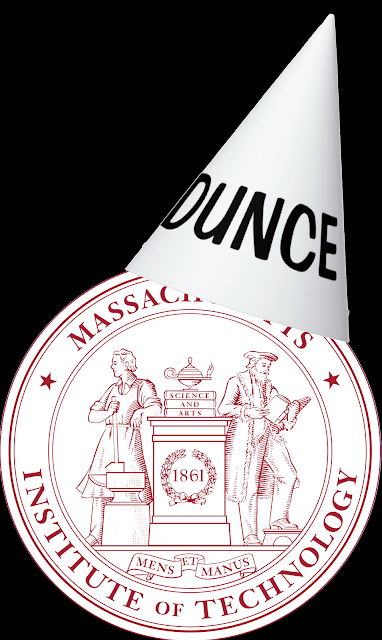 The late John Kennedy Toole's 1980 novel, A Confederacy of Dunces, pretty well describes the flaming geniuses at one of the world's preeminent technology think tanks: MIT in Cambridge, MA. Morons! You guys routinely solve the world's most complex problems. Even before the days of Wolfram Mathematica, undergraduates could figure out the length of a cord strung through the Earth between Washington, D.C. and Beijing. The smartest guys I knew at Andover went to MIT. You were smart enough to suspend ties with Huawei and ZTE because of their fronting for Chinese intellectual property theft. And yet can you protect your campus from email spoofing/impersonation? Phishing? Hell flaming no! You geniuses wouldn't know DMARC from a double hernia. Anybody, and I mean ANYBODY can claim to be sending mail from MIT.edu and not get caught.

Get this: 85% of your undergrads engage in frontline research at MIT Lincoln Labs (ll.mit.edu), the Woods Hole Oceanographic Institution (who.edu), and circulate through MIT Libraries (libraries.miot.edu). None of these sites are DMARC enforced! Why don't you just hang a sign on your campus that says PHISHING HOLE, NO LICENSE REQUIRED?

Unphishable you say? How about an email to Pulkit Agrawal (a new assistant professor in electrical engineering) that says: "What do you think of my attached schematics for a neuroscience black box that can translate any language there ever was into any new computational language there ever will be?"  The attachment can drop a fully developed and totally memory resident PowerShell script onto your system (see my article here) that will bypass all the anti-virus technology on Planet Earth and propagate through the entire faculty and campus infrastructure faster than you can say, "My goodness, that is one hot pepper sauce!"

All the politicians placed end-to-end can't pass laws to protect you idiots from yourselves. Alas, it's too late for you anyhow. All those free computers you got from Huawei and ZTE have BIOS-resident viruses that will blast out no matter how many times you reformat your hard drives. Which means a bunch of hackers in China are laughing their asses off at you right now.

So maybe you dunces should spend a little less time memorizing the first ten-thousand digits of pi and figure out how to clean up your intellectual infrastructure.
Email Post