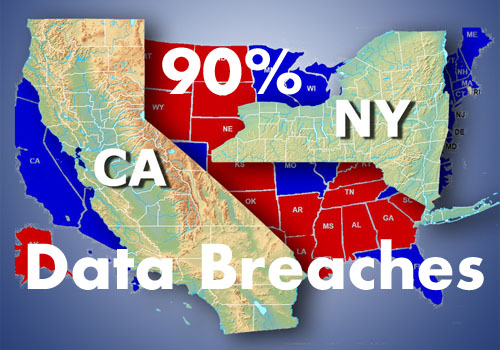 According to TechRepublic (see the story here), 90% of the data breaches in the U.S. occur n New York and California. Why? Simple, grasshopper:


And both states are easy pickings for phishermen. The state governments have no email impersonation/anti-phishing protection. Few technology companies enforce DMARC protections. Few big law firms and accounting firms are protected. And it's hit and miss for second-tier financial institutions, through which you could infect the first-tier financial institutions. The most common way for cybercriminals to infect systems is through phishing.

The tragedy is, there are technologies that can routinely and automatically inoculate any organization with DMARC enforcement. Worse news, though, is that three major suppliers of this technology—Agari, dmarcian and proofpoint—fail to turn on said enforcement. Which according to Senator Elizabeth Warren should be a criminal offense.

There ought to be a law…