"Amazon can no longer be trusted as your online supplier!" Mad Max 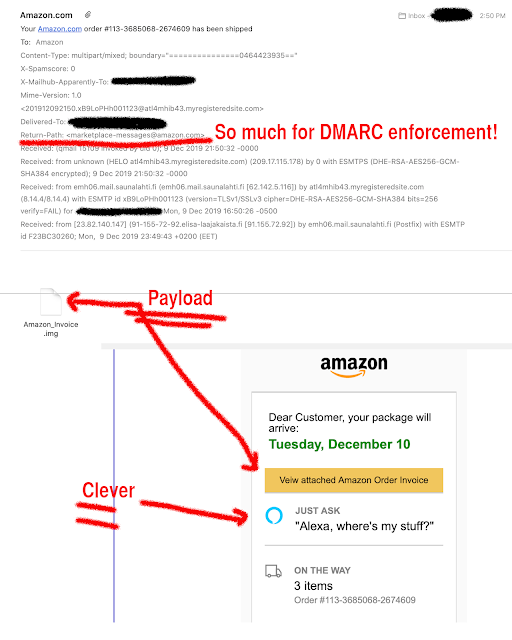 Talk about an "Oh Shit!" moment. Phishers about got me. I went to Alexa after getting this and asked, "Alexa, where's my stuff?" Since I have some Christmas orders, they told me I had stuff arriving. And I almost clicked the payload boxes. But then, the delivery date was off a day. So I went to my Amazon orders and…hey…my stuff wasn't coming on Tuesday, December 10th! So I went back and asked again, "Alexa, where's my stuff?" I'd pre-ordered a book in July,  and it was coming later. Only one item, not three!

Then I checked the Amazon DMARC enforcement record, and they supposedly are protected. The hell they are, the worthless bastards.

Wait a minute! Once the rush of pus dissipated from my brain, I remembered that Amazon order confirmations NEVER EVER had an Amazon_Invoice.img file attached.


No wonder Microsoft Azure got the JEDI dream. As reported by the UK Register (read it here), Amazon accused President Donald Trump of axing the Amazon bid because Trump hates Jeff Bezos. Hell, after this muck-up, I HATE JEFF BEZOS and AMAZON PRIME! Good riddance, bastards!

Mad Max
Looking For An Alternative To Amazon